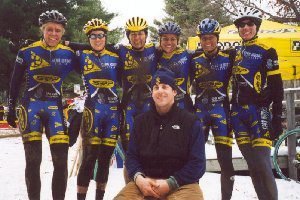 Spin Arts Stevens Cycles is proud to be a sponsor of the Gear !

Led by the two of the founders of New England Cyclocross, Paul Curley and Tom Stevens, the team
has been a venerable breeding ground for cyclocross national and world champions; throughout the team's XX-year history, the team has stood atop the top step at National Championships over XX times.

Paul Curley, Kathy Sarvary, Marianne Stover, Steph White, Scott Wade, and (anyone else?) have all donned the stars and stripes jersey multiple times. Shauna Gillies-Smith was a multi-time winner of the Canadia, National Championships and represented Canada in the elite World Championships in 2003. The team always has a strong showing in the masters events at cyclocross nationals, with numerous podium finishes in all age categories. Paul Curley and Kathy Sarvary have been Masters World Champions multiple times.